Proteins, particularly antibodies, have tremendous research and clinical value, but growing and purifying them can be challenging. To isolate proteins of interest, and produce sufficient yields for ongoing study, labs must carefully remove genetic material, extraneous proteins and other molecules. The process is not unlike panning for gold.

Once a protein is isolated, researchers can characterize its structure, function, interactions and other traits. However, just getting to this point can be time-consuming, expensive and create a significant bottleneck in the drug discovery process.

The faster labs can purify samples; the faster they can test them. But purification can be a slow, manual process, and that slows the entire workflow. By automating this process, labs can process more samples, faster, and move on to validation. The purification process is no longer the rate- limiting step.

This approach is error-prone and time-consuming. Even more concerning, it keeps highly skilled scientists chained to an assembly line rather than designing new antibodies and performing other critical functions.

On the other hand, protein purification is challenging to automate. This particular I-O workflow starts
with 24-well plates, containing unpurified samples, which are barcoded, taken through a centrifuge and filtered. Magnetic beads are then added and the sample is incubated for two hours.

The beads are then washed and the samples filtered into 24-well collection plates. Following additional filtration and shaker incubation, the samples are placed in 96-well storage plates. Ultimately, a portion from each well is transferred to read plates, and total protein amounts are recorded.

The complex structures of proteins have myriad impacts on human health and medicine.

To maintain a linear progression, and ensure critical liquid handling steps are only executed when plates are ready, Biosero developed a global script – a list of commands – that divides the workflow into three distinct parts:

The global script evaluates multiple variables simultaneously, such as the number of initial production plates, plates in the system and available shakers.

By breaking the process down so seamlessly, the script can temporarily disable any of the three workflow segments as needed, preventing deadlocks and prioritizing plates that are already in the system. In addition, Biosero’s Universal Liquid Handler driver works with the Green Button Go software to feed multiple plate threads to the Tecan and execute the liquid handler’s protocols. As a result, samples are processed as quickly and effectively as possible, enhancing throughput.

The scheduling software enforces a linear progression for liquid handling procedures, with each sequence executed in order and completed before another sequence can begin. This helps simplify run design, alleviating the need for additional scripting.

The scheduling software enforces a linear progression for liquid handling procedures, with each sequence executed in order and completed before another sequence can begin. This helps simplify run design, alleviating the need for additional scripting.
Green Button Go software adjusts multiple variables on the fly, resetting based on plate movement. The software tracks plates as they move through different parts of the system, delays them as necessary to ensure effective processing and releases them to continue processing.

The system can do more because it’s not restricted to an eight-hour day. It reduces human error because, instead of a person hand-pipetting samples from plate to plate, everything is handled by robots, and scientists don’t have to worry about losing sample integrity. All samples are handled consistently in terms of timing, temperature and other factors.

The system also manages consumables more efficiently. Tips are automatically provided, as needed, and sent to waste, as required. The system calculates how many tips should be used for each plate. Rather than automatically replacing a tip box that’s partially full, the software tracks progress and uses all tips, saving money and the environment.

At the end of the run, the system produces the critical data the team will need to move forward, showing them how much purified protein, they have generated. With the system now fully automated, researchers can focus more on antibody design and other vital tasks and let the system purify antibodies on its own. 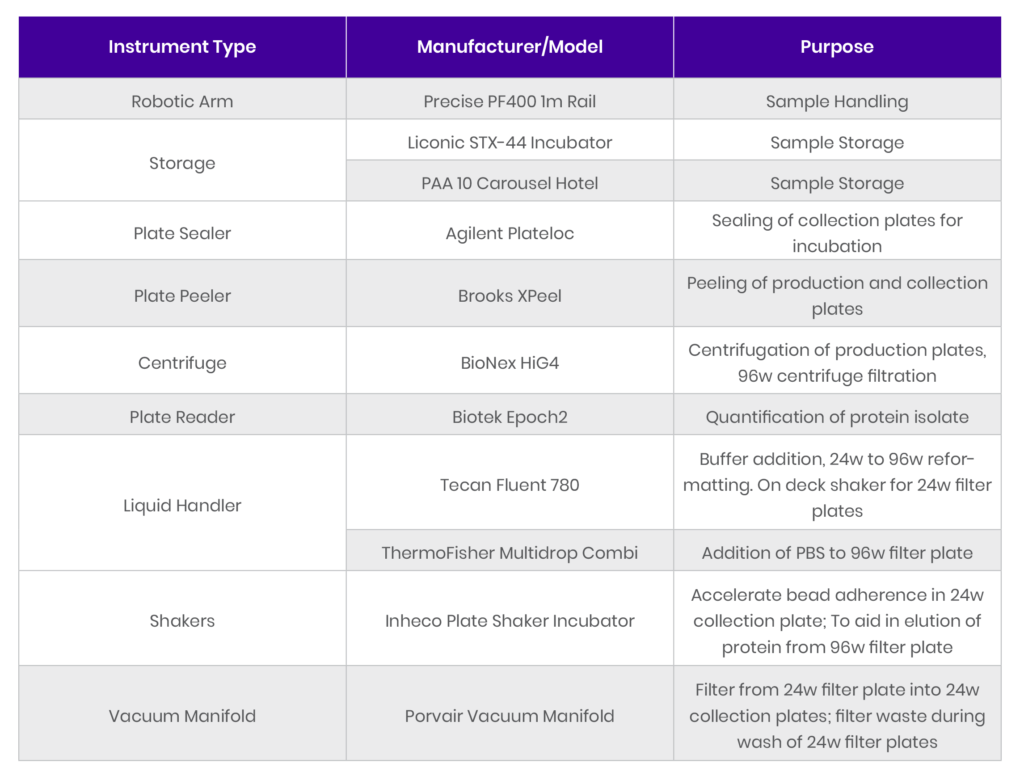