You’ve heard of Biosero, but are you familiar with the team behind it? We’ve kicked off a new blog series to profile some of our great employees and give you a better sense of who we are. 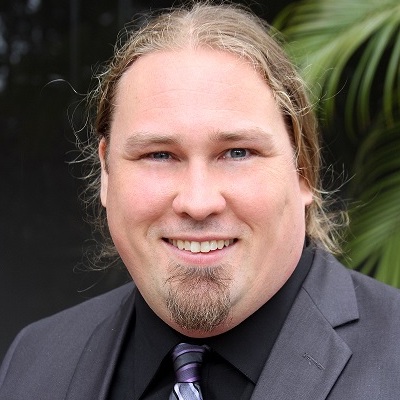 In this post, we’ll meet David Dambman, Chief Technology Officer. He joined the company in 2010 after serving as an independent software consultant in various industries and has guided Biosero’s technology development ever since.

Q: What do you do at Biosero?
A: I’m responsible for not only the operations of the software engineering team and the hardware integrations team, but also for building workcells and systems and setting up robotic platforms. My job is to ensure that these teams have everything they need to be successful. I also help to set the vision for Biosero, thinking about how we utilize the incredibly talented people on my team to meet the needs of customers today as well as five years from now.

Q: How did you get on this career path?
A: My college path got derailed when I started a business designing, building, and selling guitar effects pedals. Our pedals were sold in more than 100 stores around the world and used by some of the best musicians in the industry. After that, I shifted my focus more toward software. I’d been programming since I was 9 years old — starting with Pascal and assembly language — and have always been interested in electronics. I did a lot of software consulting, working on projects involving aircraft maintenance data analysis and visualization, electronic warfare (mostly radar jamming), and some interesting supply chain optimization projects.

Q: What brought you to Biosero?
A: I learned about Biosero from a friend who was working here. It seemed like the perfect combination of hardware, software, science, and technology. I started with the express vision of developing a powerful but easy-to-use automation scheduling software. I had never even been in a lab, but in some ways that was an advantage because I looked at things from a different perspective. I could bring in well-established best practices from another industry at a time when things in the life sciences were still very much the Wild West.

Q: What’s one thing you wish more people knew about laboratory automation?
A: I wish people had a bigger vision of what’s possible; that we can do a lot more than what we have always done. Many people look at automation as a way to solve a particular problem, but it can also really unlock creativity in the discovery side. The earlier you apply automation, the more new capabilities you’ll unlock.

Q: If you could automate anything in your life, what would it be?
A: Dinner. There has got to be a better, healthy way to feed a hungry family after a long day at work without resorting to takeout or delivery.

Q: What’s your best career advice?
A: We need more system-level thinkers. In a rapidly changing world where technology is evolving as quickly as it is, the most important thing is that people learn how to learn. Some of that is not taught well in the technical tracks at universities, but is offered more through the humanities. Most people aren’t going to be working for the same company or solving the same problem their entire career. The most valuable people are the ones who can adapt, see the big picture, and jump in and solve a problem without the need for formal training.

Q: What’s something your colleagues don’t know about you?
A: I was bitten by a viper when I was eight years old! It was in the Alps in Austria. I was climbing on some rocks when I saw something moving down below. I jumped down and grabbed it, and it bit me on my left hand. My arm rapidly swelled up and discolored, and I had to be rushed to the hospital where I spent several days recovering.